Serinus Energy Inc. (“Serinus”, “SEN” or the “Company”), is pleased to report its financial and operating results for the year ended December 31, 2016. 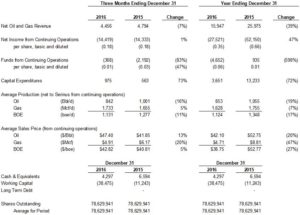 Serinus will concentrate on the development of the Moftinu Gas Development Project in Romania which will include building surface facilities.  This is a near-term project that is expected to begin producing from the gas discovery wells Moftinu-1001 and Moftinu-1000 in early 2018. The Corporation has obtained all necessary approvals for, and will soon commence, the construction of a gas plant with 15 MMcf/d of operational capacity. Construction of the project will proceed over 2017 with expected first gas from this project in Q1 2018. The Company is also developing the drilling program to meet work commitments for the extension.

The Company’s production has been significantly curtailed in the first quarter of 2017 as a result of the shut-in of the Chouech Es Saida field in Tunisia, which is expected to continue for the duration of the first quarter.  Assuming the continued shut-in, production is projected to be approximately 650 boe/d for the first quarter of 2017.  Full year production for 2017 is dependent on the successful resolution of the sit-in at the Chouech Es Saida field and associated security and safety issues, as well as the timing of the above mentioned capital program in Sabria.