Serinus Energy Inc. (“Serinus”, “SEN” or the “Company”) (TSX:SEN, WSE:SEN), is pleased to report the results of the year-end evaluation of its oil and gas reserves.  The evaluation was prepared by  RPS Energy Canada Ltd. (“RPS”) in accordance with Canadian National Instrument 51-101 – Standards of Disclosure for Oil and Gas Activities, and includes the reserves in Serinus’ Ukraine licences, and in its Tunisian properties. RPS also assigned contingent resources to the Company’s Satu Mare licence in Romania

All of the reserves volumes as well as the net present values attributed to the Ukraine Reserves disclosed herein, refer to Serinus’ 70% effective ownership interest in the assets through its 70% indirect ownership in KUB-Gas LLC (“KUB-Gas”), which owns and operates the six licence areas in northeast Ukraine. For the Total Company figures, those aggregate values are also based on 70% interest in the Ukraine assets. Note that the Company sold all of its interests in Ukraine subsequent to December 31, 2015.

Note: Serinus reports in US dollars. All dollar amounts referred to herein are in USD, unless specifically noted otherwise.

2015 was another challenging year for Serinus and the petroleum industry in  general.  For  the industry, the continuing issue was the collapse in oil prices.  The price of Brent Crude started at over

$56/bbl in early January, strengthened to above $66/bbl in May, then falling below $37/bbl by year end. During January 2016, it reached $28.55/bbl before finding some strength and has been recently trading near $40/bbl. This has reduced profitability for the entire industry, and caused significant changes in the economic value, and in some cases, the economic viability of reserves and resources.

Total corporate 1P and 3P reserves were substantially unchanged from 2014, while 2P reserves fell by 4%. Lower commodity prices and price forecasts were the dominant factor  in 2015.  The forecast  price for Brent crude for 2016 is $44/bbl, vs. $74.64/bbl in the 2014 evaluation, and in the longer term, the new forecast only recovers to 92% of that used last year. This reduced reserves volumes due to earlier economic cut-offs, and delays some development plans. Individual fields (or countries) had other positive and negative revisions as well which are discussed below.

As in previous years, there were markedly different results between Ukraine and Tunisia, the two countries in which the Company’s reserves were located.

In Tunisia, 1P reserves decreased by 17%, while 2P and 3P reserves increased by 1% and 10% respectively. In addition to the effects of lower commodity prices, the revisions to reserves include:

1P reserves in Ukraine increased by 20% and 2P and 3P reserves decreased by 12% and 18% respectively compared to year end 2014. The key influences on the Ukraine reserves were: 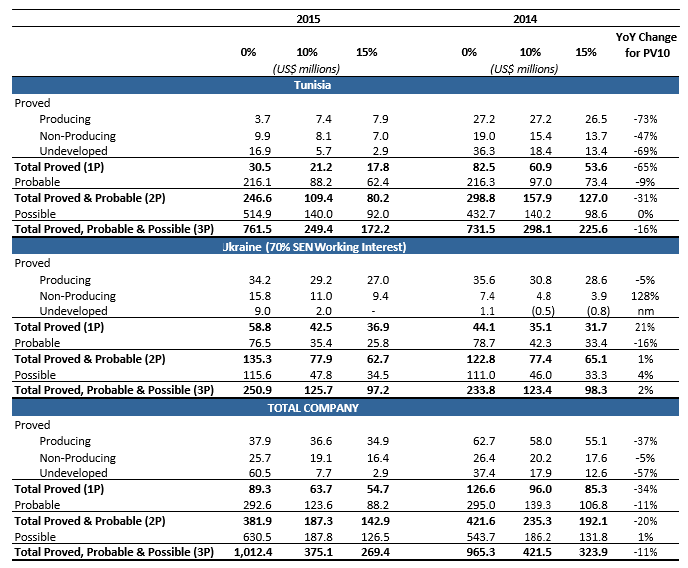 Net present values for Serinus’ reserves declined by 34%, 20% and 11% for 1P, 2P and 3P reserves respectively.  The major contributing factors to those declines were:

The decline in oil prices significantly outweighed all other factors, even in the 2P and 3P categories which experienced net volume increases.

The drop in oil prices has an effect on Tunisian gas prices as well. In general, gas in Tunisia is priced as an equivalent to low sulphur heating oil, which in turn, will fluctuate with oil prices.

The more significant impact on the value of the Ukraine reserves came from the decrease in nominal natural gas royalties from 55% to 29% effective January 1, 2016. This more than offset the loss in value due to the lower commodity price forecasts in all three categories.

In addition to the 1P, 2P and 3P reserves assigned to the Company’s properties in Tunisia and Ukraine, contingent resources were also assigned to the Moftinu discovery in Romania made in early 2015.  The Moftinu-1001 well tested at a maximum rate of 7.4 MMcf/d and 19 bbl/d of condensate.  The currently development plan contemplates three development well and a gas plant tying into an existing sales line running through the Satu Mare concession. The resources and their net present values are shown in the table below.

Pending regulatory approvals by the Romanian government and the ability to finance, first production  is anticipated in early 2017 and will require $14 million of capital expenditures.

Note: Finding, Development (and Acquisition Costs) in the tables above are shown and calculated on the basis of 100% working interest in Ukraine, consistent with the consolidated financial reporting and statements.

BOEs may be misleading, particularly if used in isolation. A BOE conversion ratio of 6 Mcf:1 bbl is based on an energy equivalency conversion method primarily applicable at the burner tip and does not represent a value equivalency at the wellhead.

Test results are not necessarily indicative of long-term performance or of ultimate recovery. The test data contained herein is considered preliminary until full pressure transient analysis is complete.