Serinus Energy Inc. (“Serinus”, “SEN” or the “Company”), is pleased to report its financial and operating results for the three months ended June 30, 2017.

Notes:  Serinus prepares its financial results on a consolidated basis. Unless otherwise noted by the phrases “allocable to Serinus”, “net to Serinus”, “attributable to SEN shareholders” or “SEN WI”, all values and volumes refer to the consolidated figures.  Serinus reports in US dollars; all dollar values referred to herein, whether in dollars or per share values are in US dollars unless otherwise noted. 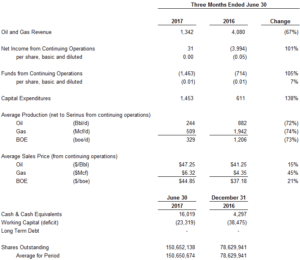 The Company is focusing on Romania as the impetus for growth over the next several years. The Moftinu gas development project is a near-term project that is expected to begin producing from the gas discovery wells Moftinu-1001 and Moftinu-1000 in early 2018. The Company signed an EPCC contract on May 9, 2017 and has commenced construction in Q2 2017 of a gas plant with 15 MMcf/d of operational capacity, with expected first gas production in the first quarter of 2018.

The Company is also developing the drilling program to meet work commitments for the extension and plans to drill two additional development wells (Moftinu-1003 and 1004) with a potential third well in 2018. The Corporation sees potential production from these wells being able to bring the gas plant to full capacity in late 2018.

In Tunisia, the Company’s plans to focus on carrying out low cost incremental work programs to increase production from existing wells, including the Sabria N-2 re-entry and installing artificial lift on another Sabria well, are dependent on resolution of the social issues in Tunisia and the Company being able to restart production in a safe and sustainable environment. The Corporation views Sabria as a large development opportunity longer term.

Production volumes decreased in the second quarter to 329 boe/d, as compared to 1,206 boe/d in the comparable period of 2016.  In Q2 2017, the decrease in production is attributable to the shut-in of the Chouech Es Saida field since February 28, 2017 and the Sabria field since May 22, 2017.  The shut-in of these fields was due to social unrest in southern Tunisia that has stopped all oil & gas production in the region.

Full production in Tunisia for 2017 is dependent on the successful resolution of the social unrest in southern Tunisia and the associated security and safety issues this unrest has created.