Serinus Energy Inc. (“Serinus”, “SEN” or the “Company”), is pleased to report its financial and operating results for the quarter ended September 30, 2016.

Note: Serinus reports in US dollars. All dollar amounts referred to herein, whether in dollars or dollars per share, barrel, Mcf or other are in USD, unless specifically noted otherwise. 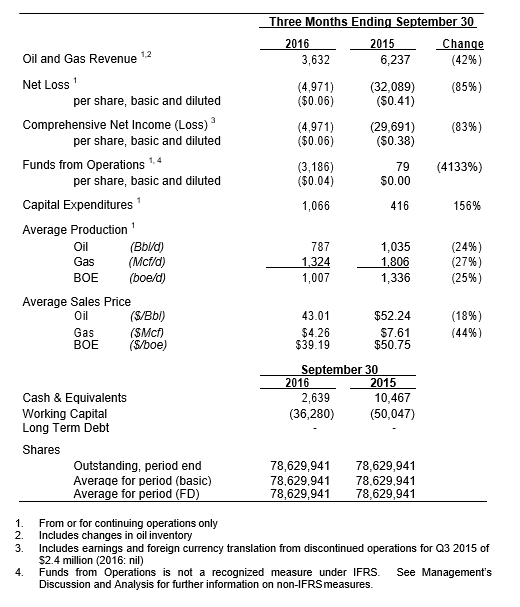 Average daily production (SEN WI) for the fourth quarter to date has been approximately 1,226 boe/d (919 bbl/d of oil, 1.84 MMcf/d of gas) with the restoration of production from CS-1 and CS-3.

The Company’s focus remains on reducing costs wherever possible while maintaining existing production in Tunisia. Budgets will be re-examined on an ongoing basis in the event of that management becomes confident that such prices can be sustained, and that funding is available to recommence drilling.

As previously announced, on October 31, 2016 the National Agency for Mineral Resources (“NAMR”) in Romania granted approval of the Phase 3 Extension Addendum (the “Addendum”) for the Satu Mare Licence. The Company will now concentrate on moving the Moftinu gas discovery into experimental production. Serinus has been conducting certain engineering studies and preliminary design work with respect to the requisite surface facilities and development wells, but was limited from substantial further progress until the approval of the Addendum.

Serinus, through its wholly owned subsidiary Winstar Satu Mare S.A., owns a 60% interest in Satu Mare. The owner of the remaining 40% (the “Partner”) has indicated that it does not wish to participate in future development. However, the Partner is currently in a legal dispute with the Romanian government, and its ability to transfer that interest to Serinus is uncertain. The Company is in discussions with the Partner and various government agencies including NAMR and the financial authorities to ensure that it acquires 40% interest.

The Company is examining several alternatives for funding the development activities in both Romania and Tunisia.

BOEs may be misleading, particularly if used in isolation. A BOE conversion ratio of 6 Mcf:1 bbl is based on an energy equivalency conversion method primarily applicable at the burner tip and does not represent a value equivalency at the wellhead.